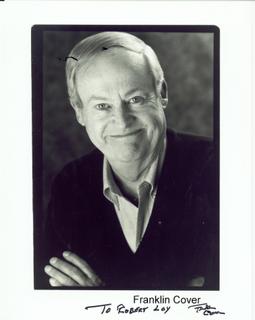 The mailbox was pretty full today, although much of it was junk from Best Buy, Jiffy Lube, Sofa Express and Capital One (who just refuse to believe that I don't want another credit card). I also got some address labels from Jerry Lewis and the Muscular Dystrophy Association, an invitation to the Virgina Wine and Garlic Festival in October, the new issue of The Week magazine, a new issue of "Busted" which is the newsletter of the excellent censorship-fighting Comic Book Legal Defense Fund, a couple of payments for my recent eBay auctions, a gas bill that I am working up the nerve to open, and one autograph.
In case you don't recognize the gent to my right, that's Franklin Cover and he played Tom Willis on the TV show "The Jeffersons" (you know, where "The fish don't fry in the kitchen, and the beans don't burn on the grill!" which doesn't make any sense when you think about it; I mean fish do fry in the kitchen, I've seen it done myself on many occasions -- and what kind of fool would try to cook beans on a grill? That's just a good way to get pintos in your charcoal.)
This autograph presents me with a dilemma I have not had to face before. I don't know if it's technically an autograph or not. I mean he wrote "To Robert Loy" and "Take Care" but he didn't actually sign it.
Hmmm. . .
Oh well, it's going in my autograph collection. I don't have time to worry about it. I've got some beans on the grill.

Thoughts while riding in an elevator 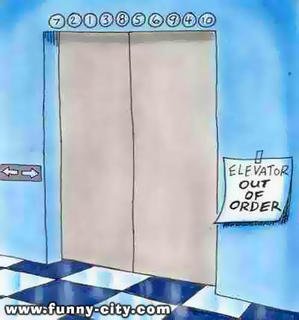 I work in a three story building, that's it, just three stories. On the first floor there's an UP only call button, on the third floor there's a DOWN only call button, and on the second there are both. Makes sense, right? What doesn't make sense is why after I get on the elevator on the second floor I have to push a button to get to the floor I want. I mean if I pushed the DOWN button I must want to get to the first floor, there is no basement. If I pushed UP I must want to go to the third flooor. Why with all of our appliances getting smarter and smarter all the time, why are elevators still so stupid?
I also gotta wonder how come there's elevator music playing everywhere in this building _except_ in the elevator.
Posted by Norrin2 at 12:42 3 comments: 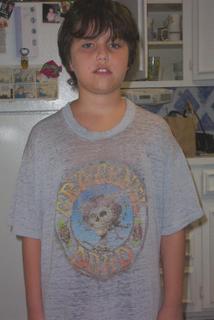 I used to deny it. I used to call myself a connoisseur, but the truth is I am a collector. I collect comic books (more than 3000 of them in 3 different rooms in my house) autographs (almost 1000) magazines, books, (and autographed books, magazines and comics) postcards, bookmarks and literary references to the song "Macarthur Park."
I even collect T-shirts. But they're a bit of a problem to categorize. My credo has always been that the difference between a collection and a conglomeration of junk is organization. And all of my other collections are neatly categorized and cross-referenced, alphabetized and numericized.
But my T-shirt collection is just there in my closet and my dresser. Oh, there's an aborted Excel file in my laptop called "shirts" but breaking them down by color and size (all XL) and theme just seemed too silly even for me. Probably because the only one way to categorize garments is by the story they tell. And I can't figure out how to get Excel to do that.
This is the oldest shirt in my collection.
I got it on June 4th, 1989 at a record store in Knoxville Tennessee, so it's 16 years old and is retired; I no longer wear it although I still love it. I couldn't tell you exactly what day I bought any other shirt I own. The only reason I know this one is because after I got back from purchasing the shirt, I learned that the Chinese Government had decided to massacre the pro-democracy student demonstrators that had been amassing in Tiananmen Square for several weeks. Something like that kinda sticks in a memory even as shoddy as mine.
I've had other Grateful Dead shirts and they've all gotten old and raggy and thrown out, but the reason this one is still occupying a place of honor in my closet is because of the tenacious way this cheap concert shirt held to life even though I wore it frequently and treated it rough. It didn't get holes or rips in it, but it kept fading and fading until you could literally see right through it. My family would tease me when I wore it and tell me to go put on a shirt because the thing was translucent -- and very soft, I've never worn anything softer -- while still maintaining its structural integrity. If you look closely at this picture of my son Dylan wearing the shirt you can see where it became transparent.
Just when I thought it was some kind of magic shirt and I would be able to wear it until it completely disappeared, it started to break down, got some holes in it, and I decided that rather than wear this old warrior to death, I would retire it with honor. Which is what I've done.
This is still my favorite shirt and not just because it's the oldest. I said earlier that shirts should be organized by the story they tell. This shirt tells me a story about how one should grow old. That is why as I age I intend not to break down bit by bit but to slowly become gossamer.

For the past 10 years I have written a column for the magazine Country Standard Time. It doesn't pay much but I also do reviews and features so I get free CDs and videos and press kits, and the deadlines do keep me writing, since God knows I'm not very self-disciplined. (And I may be getting a raise, since one of the CDs I had to review this month was the soundtrack to the Dukes of Hazzard TV show and I told my editor if he expected me to listen to crap like that he was going to have to pay me more.)
Anyway I finshed my column today and I thought I'd give you loyal readers of this blog a chance to check it out before it gets published.
Be careful now, I can see you're on the edge of your seat:


One of the good things about country radio stations playing more of the classics or legends or “moldy oldies,” whatever you want to call them, is that sometimes you’ll hear a song that you haven’t heard in a long, long time. The experience can be very enlightening, sort of like running into an old schoolmate and seeing how much each of you has changed.
I ran into two such old friends this week, with mixed results.
One of them was Earl Thomas Conley’s “Holding Her and Loving You” which in 1983 I thought was an insightful look at a complex love-triangle with no clear-cut good or bad guys or easy solution. I welcomed it with a hearty turn of the volume knob.
Unfortunately, this old friend now seems to be obsessed with arranging the hard things he has had to do in life in order of difficulty. He wants me to feel sorry for him even though it turns out the hardest thing this skunk has ever had to do is cheat on his wife who, in his own words “ain't done one thing wrong” and who was “good to (him) when things were going rough.” It was great to hear E.T.’s beautiful baritone again, but this is not a friend I want to spend any time with in the future.
Consequently, I was more than a little wary when I ran into another alumni of the class of ’83. The Nitty-Gritty Dirt Band’s “Dance, Little Jean” was my favorite song for a long time. It never failed to put a lump in my throat every time I heard it. I broke up with the girl I was dating around that time solely because she did not like this song.
What a relief to discover that this companion of my youth has aged so well. It was actually in better shape than I remembered, judging from the size of the new lump in my throat. I can honestly say I have read 400-page novels with less character development and emotional resonance, and that for three or four minutes I felt like a young man again.
Now you can’t ask for much more than that from an old friend.

How do you do? 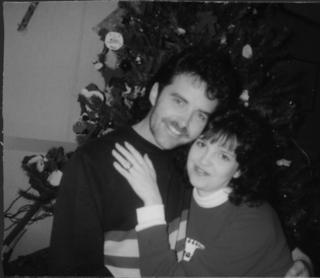 Believe it or not, I had forgotten that this is a black and white Christmas-tree motif-y picture too, which is kinda odd cuz I'm not crazy about Christmas. I am, however, crazy about the woman in the picture with me, my beautiful bride Kimberly.
My favorite picture of me as an adolescent is in color and there are no Christmas trees in sight. I am in my grandmother's front yard wearing the denim jacket I thought was so cool, and I am making a threatening gesture at my brother John, who was trying to stick his face into my picture -- a bad habit of his, he used to do it to strangers at Disneyworld too.
(And yes, I do have a tendency to put things in the order of how much I like them, kinda like that guy in Nick Hornby's brilliant "High Fidelity")
Posted by Norrin2 at 15:06 2 comments: