I just got my sixth batch of homebrew into the primary fermenter today, and I thought it might be good to take a look back before they all start to melt together in my memory. The first two batches -- an Irish red ale and a raspberry wheat -- were learning experiences and as such they were successes. Actually they were not exactly failures as finished product either. The Irish red was fine if nothing spectacular, the raspberry wheat had a whinge of artificial fruit flavor from the raspberry extract, but both were drinkable -- they must have been, they're all gone.
But I think I really hit my stride with batch #3, a double chocolate stout. This was my first full boil (i.e. in a kettle big enough to boil the full five or more gallons rather than adding water after the boil to make it to the five gallon mark) and I think that's a big part of the reason it turned out so well. I've tried to do something different with each batch but nothing has resulted in a giant leap in quality the way full boil has. And another reason may well be that I freaking love chocolate, love stout and lovelovelove chocolate stout.

This beer tasted great after two weeks in the bottle, but now after two months I honestly believe it is as good as any chocolate stout I've ever purchased in the store. And I'm very sad that I only have a handful of bottles left.
Batch #4 was an imperial IPA (India pale ale) and it turned out very nicely. This was my first dry hop and my first partial mash. It's very good, very hoppy and just a little darker than an IPA should be. Not sure what the problem is there, but all my brews seem to come out darker than the style guides would have. (Another reason to love Stout: it can't be too dark.) And I have every reason to believe that like the stout it will get better with age -- if I can keep my hands off it long enough to let it age. 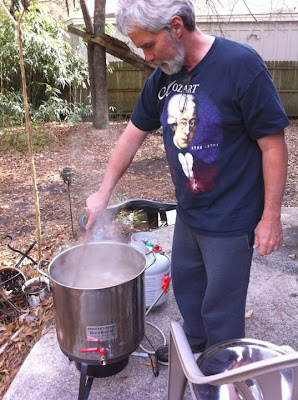 I did a Cascade pale ale for my fifth batch, and I experimented with this one a little. I had some frozen blueberries that my son Dylan and I picked last summer and I wanted to use some of them in here. I heard a homebrew podcast where a guy was talking about brewing with blueberries and he said he didn't do anything to them (other than thaw them out) and they just floated on top of the fermenter and did not add much in the way of flavor or color. So I decided I would mash mine up some and this seemed to work out well; they did not float to the top and they turned my formerly straw-colored brew purple.

So I felt good about my decision to mash the fruit -- until bottling day, where bits of blueberry clogged up everything -- my siphoning tube, my bottling wand (as a a matter of fact, my bottling wand has still not recovered and I may have to buy another one) -- and I eventually ended up straining the beer through an old (but very clean t-shirt) and even so I ended up with only 4 gallons instead of five. Worst of all, I was half way through the bottling process when I realized I had not added any priming sugar -- which is the stuff yeast eats to carbonate the beer -- so I poured it all back in and started over, with a sick feeling because I know the more you handle the beer the more chance there is of something going wrong. And I think something did. I opened one blueberry beer today just to see how it was coming along and at least half of it fizzed out all over the counter. Overcarbonated to say the least. The second one I popped open had absolutely no carbonation whatsoever. So I'm afraid I've got a batch that's half berry wine cooler and half blueberry seltzer. But maybe I just happened to grab the two beers that got the yeast extremes and the others will be fine. Time will tell.
What I made today was a hibiscus honey wheat and so far no problems. It's pink and I'm done for a while with Crayola beers. I'm trying to decide what to do for my next batch -- maybe a mead, maybe another chocolate beer, or maybe it's time to go all grain, maybe brew in a bag. . .
Posted by Norrin2 at 16:04 2 comments:

In 199o Charlie Sheen shot and wounded his fiance Kelly Preston. In 1994 he was sued by a college student who alleged that he struck her in the head after she declined to have sex with him.In 1996 he assaulted a porn star. In 2006, his wife at the time, the actress Denise Richards, filed a restraining order against him, saying Mr. Sheen had shoved and threatened to kill her. In December 2009, Mr. Sheen’s third wife, Brooke Mueller, a real-estate executive, called 911 after Mr. Sheen held a knife to her throat. And on Tuesday, Ms. Mueller requested a temporary restraining order against her former husband, alleging that he had threatened to cut her head off, “put it in a box and send it to your mom.”

What I want to know is why is this guy on the cover of People and US, all over television and not in prison? Hey Media, he's not a "bad boy" and there is nothing cute about this. He's a psychopath.

Today I'm trying a Smoked Porter from Stone Brewery. I like Porter, I like everything I've tried from Stone -- some of their stuff is desert island beer, stuff I would want with me if I were a castaway -- but I'm not sure what it means when a beer is smoked. Obviously it's not smoked the same way as ham, is it? I'll be having this with a smoked Gouda as well, and I don't know how they smoke cheese either. ( I tried to smoke cheese once back in the 70's but I couldn't keep the damn thing lit.)

APPEARANCE: Pours a deep, dark brown. Almost black but if you hold it up to the light you can see some ruby around the edges.

AROMA: I'm not really getting much in the olfactories. Maybe some oakiness.

TASTE: Well, no, let me do mouthfeel first:

MOUTHFEEL: Thinner than I expected -- but that's what I get for having preconceptions about a beer I know nothing about. I'm sure it's because I expect black beers to taste and feel like stout.

Okay, now TASTE: Well, one sip is enough to teach me what smoked beer is all about. You know how a good barbecued potato chip tastes. This is like that, tangy and (duh!) smoky. The smokiness lingers or dissipates briefly and then reappears again -- kind of an after-aftertaste. It's interesting how the malt and the hops are noticeable but definitely playing second or third fiddle to the smoke. The smokiness of the Gouda is even more in-your-face but maybe not as long-lasting - but I'm not sure because I've got that smoky taste in my mouth now and I'm not sure which is cheese and which is ale. (By the way, Gouda recently replaced Swiss as my number one favorite cheese -- so congratulations to Gouda.)

DRINKABILITY: Hard to say. At the Brewvival this weekend I complimented the rep from the Bruery on their sweet potato beer, and he said he liked it too, but he could only drink like one a year. I can definitely see myself drink more than one smoked porter a year; I can even see myself have two back to back, although a palate cleanser in between might be a good idea.
Posted by Norrin2 at 17:33 No comments: