One more song that takes my breath away every time I hear it. And not only am I going to try to convince you that it's a great song. I intend to prove that it is better than "Moby Dick" or "War and Peace" or any other classic novel you can name.
Ready?
Here we go.
The song is called "Austin" and it's by this pearly-toothed gentleman here. His name is Blake Shelton: 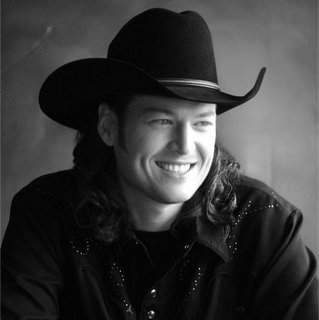 I'm not going to link to any of the sites that'll show you the lyrics. You won't get the full impact of the song that way. Go download it. Emusic.com will give you a free 50 song 30 day trial. Download this song and "November Rain" and "Hang on, Sloopy" plus 47 more of your choosing and then quit. Or if you prefer doing things the old-fashioned way, go buy Mister Shelton's self-titled debut CD, which I guarantee is worth the price of purchase just for "Austin" alone, but you also get the greatest prison-break-assisted-by-dogs-in-heat country song ever -- "Ol' Red" -- to boot.


Okay, so now that you've done your homework, let's examine this song and see why I have to pull off the road if it comes on while I'm driving, and why it blows "Moby Dick" out of the water and makes "War and Peace" look like a minor border skirmish.
The girl leaves the guy, goes home to Austin to clear her mind. One year later, she calls him up, gets his answering machine which says that the car he had advertised has been sold, if it's Tuesday night he's out bowling, and if you're trying to sell something then get lost.
And "P.S. if this is Austin, I still love you."
She can't believe it, of course. That's a hell of a long time to carry a torch. Three days later she tries again, gets a similar message about his weekend plans and the exact same coda. This time she leaves her number -- that's it, just a number. He calls her back and now she does a dead-on, heartbreakingly romantic riff on his outgoing message, and then she tells him live and in person that she still loves him. They're reunited, and I'm on the side of the road, emotionally drained and digging around for a Kleenex or something to wipe my eyes with.
Love does last. Axl was right. But this is not the needy clingy dependence that so often passes for love in much popular music, and is perhaps best exemplified in the most overrated country song ever "He Stopped Loving Her Today." The guy in "Austin" is not sitting around, underlining "I love you"s in old letters and waiting to die. He's getting on with his life, fishing, bowling, playing ball, telling telemarketers to go to hell. But the love is always there.
A masterpiece, right? But still just a nice little 3 minute song. Surely it doesn't compare with Tolstoy or Melville, does it?
This is a quote that has stuck in my mind ever since I read it. The only thing I've forgotten about it is where I found it and who originally said it, but it speaks for itself as far as truthfulness:
"Every novelist is a failed short-story writer, and every short-story writer is a failed poet." Because one of the main missions of an artist is to get his point across as completely and as succinctly as possible, because as the Bard put it, "Brevity is the soul of wit." He could have shortened even more: "Brevity is the soul."
In other words "Austin" is what Tolstoy would have written if he could've.
Posted by Norrin2 at 11:59 2 comments: