I call that a bargain, the best I ever had

We never forget your first love, do we? Mine was named “Carrie-Anne,” and she is still with me, although the years have not been kind to her, and she no longer spins around and entertains peoplelike she used to. But if you come into my office you’ll see her there – pinned to the bulletin board.
You see, my “Carrie-Anne” was a 45 from a British band called the Hollies. (And for those of you too young to remember 45’s, they were like CD singles only we played them on our Flintstones Pterodactyl stereos.) The Hollies are best known today for bigger hits like “Bus Stop” and “Long Cool Woman in a Black Dress,” but it was “Carrie-Anne” that won my heart. Every time I heard that song that summer (and it isn’t it always summer when you fall in love for this first time?) I was transported to a beautiful, ethereal world that I wanted more than anything to explore further. The problem was though that 45’s cost 59 cents and I was eight years old and chronically unemployed.
The only money I had to my name was a silver dollar that my grandfather had given me, and so I took that to the department store and bought the “Carrie-Anne” 45, took it home and played it at least ten thousand times.
But that’s not the end of the story. A couple of years after that. I became briefly interested in numismatics, and one day I looked up the silver dollar I had spent and found it was worth 1,800 dollars. 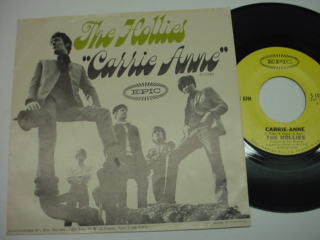 Shortly after that, my brother was jumping around on my bed and he stepped on my beloved “Carrie-Anne”, which is why the 45 I’ve got on my bulletin board is cracked and unplayable.
Now, I have not kept this memento to remind me to spend my money wisely or to look before you leap or anything so prosaic as that, nor have I kept it to remind myself not to keep valuables laying around where my brother's might jump n them. I keep it because it is a reminder of how my lifelong love affair with music began. “Carrie-Anne” led me to the Beatles and to Johnny Cash and Merle Haggard and the Ramones and Bruce Springsteen and Big and Rich and. . .
Well, you get the idea. And all it cost me for a permanent pass to this land of endless enchantment was a mere 1,800 dollars.
It was the best bargain I ever struck.
Posted by Norrin2 at 19:41

I have to agree about the bargain! Plus it's better than being naked, stoned and stabbed

I was in the UK in the summer of '65, recovering from a cold in a friend's house in Kent. Nothing but the telly, and the show was "Ready Steady Go". I was floored by "Anyway Anyhow Anywhere" (I call that a bargain) and a group I hadn't heard of named the Hollies singing the wonderful "I'm Alive". So beautiful.

If memory serves, "Carrie Anne" was toward the end of the Graham Nash era, I can hear his voice on the song in my mind's ear. I thought he was just a nice harmony guy to Allen Clarke's clear lead voice, didn't realize he'd become a major talent in the US. A friend who worked for Rolling SAtone asked me to review the first Crosby, Stills and Nash album, and I referred to the sound the Hollies had on "I'm Alive in the review.

Don't agree completely with Anonymous: only the stabbed part reviles......